The Gender Pay Gap: Analysis of the first year of returns

The gender pay gap has been a discussion point, topic of debate and point of interest for decades. In an attempt to increase awareness and begin processes to address the issue, the UK government has introduced compulsory reporting of the gender pay gap for all businesses and organisations with more than 250 employees, with returns mandatory by the 5thApril 2018. The report was based upon a snapshot of earnings for all employees for a given date at the start of April 2017. Businesses were given a year to return their results to the Office for National Statistics.

Many businesses face investigation after failing to report.

Hundreds of businesses missed the April 2018 deadline and were provided an extension, but the Equality and Human Rights Commission (EHRC) are likely to demand fines for those not publishing their reports, as required by law. Chief executive of the EHRC, Rebecca Hilsenrath, said: “Breach of these regulations is breaking the law and we’ve always been clear we will enforce with zero tolerance’, stating that employers could face unlimited fines if they fail to publish their figures. EHRC head of employment, Sue Coe, reported back in May that they would be sending terms of reference to non-compliant businesses by mid-May, saying that “there has been some lack of belief that we were committed to our enforcement role. But I would like to ensure [everybody] that we have an exceptionally able team of lawyers whose sole job is enforcement of the gender pay gap regulations,” when speaking at the Westminster Employment Forum on the 9thMay 2018.

What is the Gender Pay Gap?

The gender pay gap can be defined as the difference in pay between men and woman. The ‘pay’ measurement used is the median salary and is the common measurement used across the world. In statistics, the median is the data value at the exact middle of a set of data when the data is arranged in ascending order. Median salary is the mid-point of the data set where roughly half of all individuals in a data set will earn more than the median and half will earn less. This measure is considered more accurate than a mean or average figure, which would be skewed by the high salaries earnt by the few in large organisations. The Office for National Statistics headline measure for the gender pay gap is calculated as the difference between median gross hourly earnings (excluding overtime), for women, as a proportion of median gross hourly earnings (excluding overtime) for men. But crucially this measure does not take into account equal pay for equal work.

This April was the first year that British firms have been requested to report their gender pay gap figures. Although this spotlight is not only being shone in the UK, reports show that the UK has a larger gap than the Organisation for Economic Co-operation and Development (the OECD), average. The Organisation for Economic Co-operation and Development is an intergovernmental organisation founded in 1961 with 35-member states represented. The OECDwas founded to stimulate member countries’ progress and increase world trade. In France, a fellow OECD country to the UK, companies failing to deal with pay discrimination could be fined under a new employment law. South Korea has the biggest gap amongst the OECD member countries, with Belgium reporting the smallest.

The results in the UK, some eight years after the law was first tabled to compel companies in the UK to report on the difference between their male and female employees’ wages, reveal that in eight out of ten firms, men are paid more than women. The top line data reports a 9.8% median pay gap based on the submitted results of over 10,000 companies that supplied their gender pay figures ahead of the April deadline. Of these companies, 78% pay men more than women. 14% pay women more and 8% say that they have no gender pay gap based on the median measure.

This measure, a ‘snapshot’ of their payroll taken on the 5thApril 2017, will now be repeated on an annual basis. The data-gathering exercise, unmatched worldwide, reveals structural inequality of opportunity and will force employers to review the barriers applied to women’s advancement in the workplace.

The results have shown that the construction industry highlighted the largest sector-wide gap, with a median pay gap of circa 25%, followed by a gap at 22% in the finance industry and 20% in education.

A number of results stand out, including high street fashion house Karen Millen, reporting payment to women being 49% less on a median hourly basis, meaning that at a companywide review, women are paid half that of men. With women making up 84% of the company’s top positions, the same proportion of employees received bonuses within their pay, yet women’s median bonus pay was 96% lower than that of their male colleagues.

Benefit Cosmetics highlighted a 30.7% gender pay gap, despite women making up 90% of each pay bracket within the company. Ryanair reported the worst gender pay gap by quite some margin in the transport sector at 71.8% with 97% of the company’s top earners being male.

Of course, sceptics can be heard, stating that the gap only exists because of the choices that women make. Gender equality campaigning charity, the Fawcett Society, has defended the data-gathering exercise, stating that the report represents an opportunity for employees to talk about their pay and to find out what their colleagues earn and that it was a ‘game changer’ in terms of workplace culture and practices.

Research conducted by Business in the Community, one of the Prince of Wales’ charities found that 92% of female respondents to their poll would use gender pay gap data to choose between two potential employers. Business in the Community is a business-led membership organisation made up of progressive businesses of all sizes, who understand that the prosperity of business and society are mutually dependant and thus are the best they can be in delivering a social, environmental and economically sustainability across all areas of their business. The organisation aligns like-minded businesses to bring together their collective strength and be a force for good. Chloe Chambraud, gender equality director at Business in the Community, stated that business leaders had to understand the factors driving their pay gaps and the groups of women who are most affected. “Employers must address the root causes of inequality, from reducing bias and increasing transparency in recruitment, appraisal and promotion processes to normalising flexible working, for men and women, and offer financially viable parental leave packages. Only then we will ensure that men and women have equal lives at work and home” she said.

What of other factors affecting pay?

The Office for National Statistics (ONS), report on the findings, found that a number of factors influenced the results of the report. These factors included; working pattern, type of occupation and the impact of age. 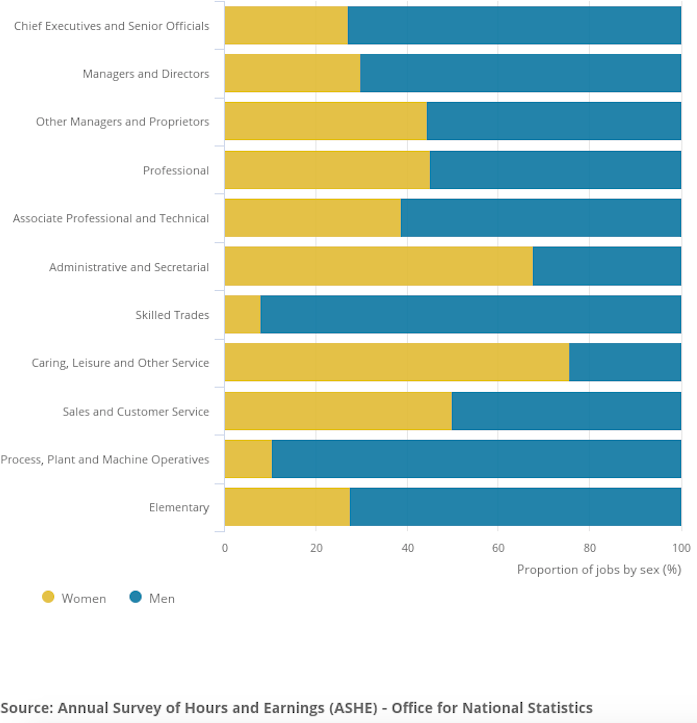 Regarding age, economic theory suggests that pay is highly correlated to the accumulation of work experience. The reporting in this area, assumed that men and women began their working careers at 16 on the same pay level. At the younger ages, men’s and women’s pay were found to grow at similar rates, at the age of 24 men’s pay had grown by 2.9 percentage points more than the comparative wages of women (since the level at age 16), but this divergence in growths continues and by the age of 48 men’s pay has grown 16.3 percentage points (since the level at age 16) more than women’s. The report continues to show that hourly wages grow with age for most of men’s and women’s working lives. For men, wages stop growing at 48, at which point they are 65.8% higher than the level at age 16, whilst for women, wages stop growing at age 45 having increased by 50.4% compared with the level at age 16. The ONS report continues, highlighting that “in both the private and public sectors, wages grow faster for men and women at younger ages compared with growth at older ages. This analysis provides further evidence for the relationship between age (an approximate for experience) and pay. The faster growth rates at younger ages reflect the higher accumulation of experience at younger ages. Looking at those aged 25 to 34 in England, employment rates for women are 19.8% lower for those with children compared with those without children, for men the employment rates are 3.8% higher for those with children compared with those without children. As women with children are more likely than men with children to take time out of the labour market, a possible explanation for the divergence in pay is that men accumulate more experience than women over their working life.” 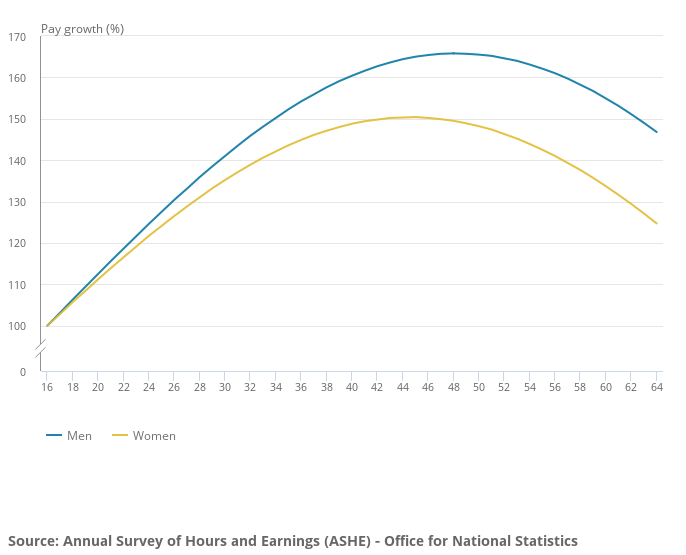 Conclusions from the ONS

The report concludes that, using the headline measure of gender pay gap, the gap for full-time workers is entirely in favour of men for all occupations. When considering age groups, the gap remains smaller for full-time workers at younger ages, widening from the age of 40 onwards with a peak gap between 50 and 59 for full time workers. It was concluded that; both men’s and women’s pay grow for most of their lives, although women’s pay grows less than their male colleagues and stops growing earlier than male counterparts.

The reporting on the gender pay divide is a fantastic first step. What will be interesting to observe now, is the actions that companies, and the public sector take on these findings and to see the change in year by year reporting.

If you require support to address a gender pay divide in your business, require advice on tackling the issue in your workplace or are looking for support in an employment dispute - as employer or employee, in the first instance, please contact our Employment Team based at our offices in Market Harborough 01858 445 480 or Leicester 0116 212 1000 or complete our express Contact Us form and we will get in touch with you.